This past July, Juan Carlos Galeano invited me to join him and other members of the HfE Latin American Observatory (LAO) to learn more about their current research and projects.  Launched in 2016, the LAO is headquartered at the Universidad de Amazonia in Colombia, the country where Galeano, the Convener of the Observatory, was born. Because of its location in a region that has only recently emerged from thirty years of civil war, the Observatory has set as its focus a series of scientific, and academic exchanges with institutions and among academics throughout Latin America that are focusing on the themes of water justice and peace. The President of Universidad de Amazonia, Gerardo Antonio Castrillón Artunduaga, and professor Jorge Reinel Pulecio Yate, who has long been recognized as a key advocate and negotiator for peace in Colombia, have both signed on as key researchers with the observatory. They are working with Galeano to foster the idea that peace is key to sustainable development if long-term social justice and ecological flourishing is the goal. 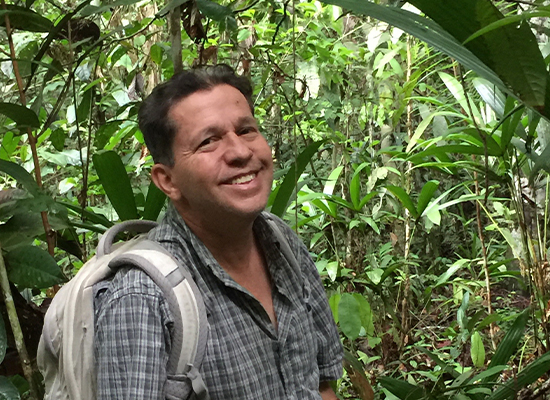 Since launch, Galeano has been recruiting new members to the LAO including Rafael Chanchari Pizuri, a philosopher and Shawi Pueblo elder who teaches at FORMABIAP (Training Program for Bilingual Teachers of the Peruvian Amazon) near Iquitos, Peru.  FORMABIAP is the institutional base of the LAO in Peru and was established in 1988 to educate indigenous students training as bilingual teachers who are keeping their indigenous languages alive. Galeano met Chanchari during his years teaching summer Spanish courses for Florida State. These were the same years he was filming The Trees have a Mother (2006), a documentary that illustrates how people in the Amazon basin employ traditional indigenous stories to navigate the everyday ethics of living with increasingly disturbed ecological systems, was filmed here. 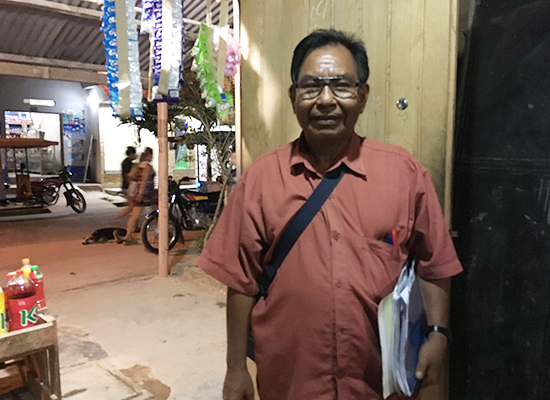 At FORMABIAP, Chanchari teaches Shawi language and culture courses that delve into the ways that Shawi stories offer insight into complex Amazonian philosophies that speak of interactions between humans, animals, fish, plants, and spirits.  These stories are evocative of complex indigenous scientific literacies regarding significant biospheric, riverine or forest ecosystems. Over the years, Galeano learned from Chanchari about how the Shawi and other indigenous peoples, including the Kokama, employ these stories to help them face today’s environmental challenges. Galeano writes about these insights in a collection of stories, with explanatory notes, that he published in 2009 titled Folktales of the Amazon.

In his second documentary, El Río (The River), which became the first project undertaken by the LAO, Galeano makes Chanchari central to the narration about how Amazonian story cycles and spiritual beliefs provide frameworks through which contemporary people interpret globalization, climate change, and loss.

I accompanied Galeano in July as he returned to FORMABIAP and the Kokama indigenous village, Padre Cocha, on the Nanay River, to screen El Río.  At the Padre Cocha community centre, many of the film’s Shawi and Kokama storytellers were in the audience. A heavy rain fell during the screening, making the audio hard to hear sometimes, but no one seemed to mind.  Applause drowned out the sound of the rain at the conclusion of the film and it was clear that the audience was appreciative as they recognised their family, friends and acquaintances telling their own stories about life in the Amazon basin in a beautiful, high-quality film.

Galeano has also recruited Herman Vladimir Ruíz Abecasis, a biologist and Director of Reserva Nacional De Alpahuayo Mishana near Iquitos, to join the LAO.  Abecasis took us on a tour of the Reserve and showed us a place called “Chullachaki’s chakra (see featured image above).”  Chullachaki is the Quechua name for an androgynous spirit being said to take care of his/her “chakra” or “forest garden.” H/she is said to punish those who act unwisely in the forest.

Galeano and Abecasis are exploring how stories of Chullachaki and other forest spirits might be employed in programs of environmental education and natural resource management to teach more people, and especially young people, about the relationships between declining forest health and the encroachment of roads and landfills.

Chullachaki must have been with us as we drove with Abecasis to see the landfill and new roads that are polluting the Reserve’s waters, disturbing animals, and causing erosion. We slowed when we saw some people by the side of the road bagging a young female anaconda. Abecasis told us that poverty is so great in the region that they were likely planning to sell the snake, displaced by the new road, to the local poacher for 50 Peruvian soles, about 15 USD, which is considered a fortune in Iquitos. Stopping to talk to the people, Abecasis convinced them to let us take the snake back to the reserve where we released it. This was a tiny victory for the Reserve and the LAO, and perhaps for Chullachaki, whose spirit still presides over the chakra. 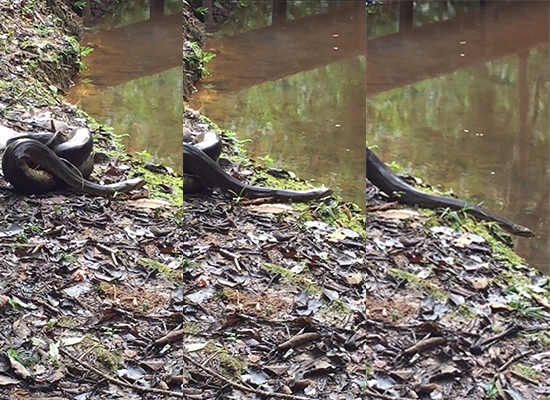 The Anaconda, returning to the waters of the Reserva Nacional De Alpahuayo Mishana. Image by Joni Adamson.

Does Philosophy Have a Place in Biology? An Emerging Debate, Part II