We’ve all seen, and in many cases become used to, the novel behaviors driven  by the coronavirus for the sake of safety and survival communities around the world.  Signs in grocery stores limiting the amount of toilet paper one can buy, reliance on delivery services like Grubhub and Doordash, and general worry about being financially able to afford food are just some of the new considerations people, who may not have thought about these things before, now think about on a regular basis.  However, these novel concerns are usually reported on from the perspectives of privilege.  Suburban-living folks in the United States, for example, often have access to a multitude of different grocery stores, while people located in both rural and highly impoverished urban areas may not even be within driving distance of one.  The pandemic has called attention to many issues that were less commonly discussed in the past which can be tied back to food, simply because everyone has to eat.

Since early September, a reading group at Arizona State University has been discussing food-related issues exposed due to the coronavirus.  The group emerges from a 2013-2015 project, funded by the Andrew W. Mellon Foundation called Dinner 2040 that focuses on designing the future of the world’s food systems, with a particular focus on arid lands food systems, such as that of the Phoenix River Valley.  The organizers of the 2020-2021 reading group are Joni Adamson, Joan McGregor and Melissa Nelson.  The group was sponsored by the Institute for Humanities Research at ASU. ASU Students, fellow professors, artists and community members, some from other states, joined the group through the technology of Zoom which has become so prominent because of the pandemic.  All were present and eager to discuss the topics of food, the environment, the humanities, and the present state of the pandemic.

Each member of the reading group  sat in their own little digital Zoom square, some with a fun background that related to the environment, like a beautiful desert landscape, or a cornfield.  All were convened to focus on the work of Dr. Elizabeth Hoover, a world renowned food sovereignty scholar and indigenous activist who had been scheduled as a  distinguished lecturer at ASU earlier in March that had been cancelled due to the pandemic.  Hoover’s  lecture, rescheduled for October in Zoom,  was titled “From Garden Warriors to Gastrodiplomacy: Farmers, Chefs and Water Protectors Working toward Food Sovereignty.” To prepare group members read articles and chapters from Hoover’s books, among other readings.  Sponsors for the distinguished lecture included The Institute for Humanities Research’s Environmental Humanities Initiative, The Global Futures Laboratory, The Human Sciences Collaboratory, American Indian Studies, The Global Institute of Sustainability, The Swette Center for Sustainable Food Systems and the School for the Future of Innovation in Society. 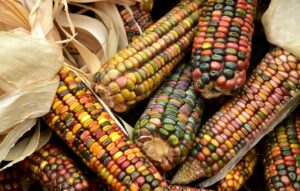 All readings focused on food sovereignty, defined in Hoover’s article “You Can’t Say You’re Sovereign if You Can’t Feed Yourself”: Defining and Enacting Food Sovereignty in American Indian Community Gardening (American Indian Culture and Research Journal, 41.3, pps, 31-70) as “(1) the importance of putting food producers and consumers, rather than corporations, at the heart of food systems policies; (2) the need to include the next generation in food production, as well as empowering food producers and artisans; (3) the importance of environmental, social, and economic sustainability; and (4) the need for transparent trade,, or a peoples’ right to sustainably-produced and culturally-significant food.” (Hoover)  The research group compared this concept with the idea of food security, which encompasses the right to food in regards to peoples’ simple caloric requirements, but “ does not specify how, where, and by whom the food that all people should have access to is produced, contributing to a focus on food-related policies that seek to maximize food production while giving inadequate attention to who will benefit from where and how that food is produced.” (Hoover)  The idea that such issues exist commonly within Indigenous communities was heavily emphasized throughout the group meetings, and continuously discussed both in readings by Hoover as well as by Indigenous members of the reading group with their own experiences and stories told to them by community members.

Food justice, as Hoover would later emphasize in her lecture,  has been a concern of Indigenous peoples since the earliest stages of imperialism-driven displacement over 500 years ago in North America, which forced Indigenous people to adopt new foods and cooking methods without the cultural significance of previous traditional foods. In addition to being culturally insignificant, these new foods introduced high-calorie foods that Indigenous people had not encountered before, making present-day communities more prone to diabetes.   Ignorance and intolerance continues to prevail towards Indigenous communities, through lack of access to culturally-significant and reasonably-priced healthy food on countless reservations.  The system fails to value things that are critical for people and the planet.

Though such challenges exist, Hoover also described the experiences and referenced the work of many Indigenous farmers, chefs, and food activists who have been impacting and leading the food sovereignty movement.  She cited Mohawk community leaders who define and advocate for food sovereignty, seed rematriation (link) movements that bring indigenous seeds back to their people, and Indigenous chefs who not only cook and serve their traditional foods, but also include lessons and lectures about indigenous food and the important food sovereignty in the dining experience.  These successful and positive movements work to empower Indigenous communities and raise awareness within non-Indigenous communities. 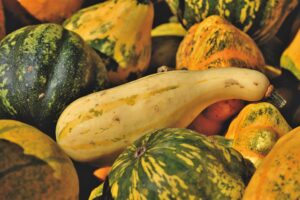 In the subsequent Q&A Dr. Hoover went into specifics about how the food sovereignty movement can continue with more, and even beyond, indigenous communities.  Ideas such as traveling food labs and seed sharing banks were discussed in the context of the pandemic state, as well as applied to a future where COVID is hopefully under control.  Hoover had already participated in countless movements directly involved with Indigenous communities and resource accessibility, such as the Standing Rock protests, and therefore had a firsthand account of what such action had the potential to accomplish.  However, it was understood by the end of the lecture that the work is far from over, and in order to continue making a difference an important step we can take in the present is increasing the visibility of such movements.

Food is a necessity of life, and the Coronavirus has exposed how inflexibility and negligence within the government, and what it provides in terms of caloric nourishment, can lead to food crises.  While the extremity of these crises may not seem apparent from the surface, lack of attention to food can lead to quantity-based agriculture techniques that harm the environment, unfairly unhealthy living conditions, and a loss of tradition, cultural identity, and sense of place under normal circumstances.  The pandemic’s effect on food heightens and interconnects all three of these social justice, environmentalism, and food security related issues.  Action through education can bring about the tangible change needed, and is certainly attainable through discussions as held by the ASU reading group, lectures as given by Dr. Elizabeth Hoover, and research as presented in the Dinner 2040 initiative.  This understanding of food is needed in academic, community, and national levels, and though the issues may not personally apply to everyone, it will take the work of many to attain a better future. 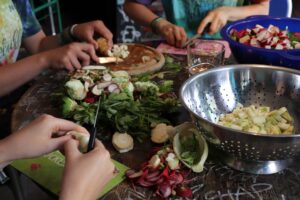 What is Biosemiotics? An Emerging Debate, Part I