The idea that ‘dust bunnies’, a collection largely of airborne particles and dead human skin cells can be living beings, let alone life overlooked may be contentious to some. It is recent enough that Western thought has understood the intentionality and agency of plants, but it is still hard to see something so apparently inanimate to be a cogent participant in any ecosystem.

The real point of contention lies in our understanding of dust bunnies. Commonly, they are seen as something that adds to the untidiness of a human household, something that needs to be swept away. Upon closer inspection, we may be able to understand exactly the kind of life dust bunnies lead, and indeed, archive.

I’m proposing the idea that dust bunnies are essentially assemblages of living matter, or at least biological matter that through certain manifestation take on a life of their own. The key components of dust bunnies include, household dust, airborne particles, human hair and skin cells (and perhaps that of household pets), and lastly, they are often known to house dust mite, that feed off of the biological detritus contained in the assemblage[i]. Thus, not only are dust bunnies “living” in a way that suits most human definitions, they embody an ecosystem of their own.

Dust bunnies, I would like to postulate are also a product of what Donna Haraway calls “naturecultures”. In the eyes of the human, it is quite literally a pest that plagues human households that have been left untended for long periods of time; yet, the creation of dust bunnies themselves requires human participation. It is through the conglomeration of dead human skin and hair that life in dust bunnies begin to crystallize, eventually making home for the certainly animate dust mites (scientific name: Dermatophagoides pteronyssinus for the European house dust mite and Dermatophagoides farina for the American house dust mite, though neither are confined to those geographical areas). Although it is life overlooked, it bears mention in many human cultural forms, most notably, children’s literature and housekeeping literature, and academic work related to both.

The association that dust bunnies have with human culture itself relegates it to a form of ‘life overlooked’. Everybody can recognize a dust bunny when they see one, yet it seems mainly of concern arguably to two demographics in human population that have been historically overlooked from a socio-political viewpoint: women and children.

In children’s literature, dust bunnies are often introduced as animate creatures that act as sort of indicator species of disuse in a child’s ecosystem. Children are warned about the presence of dust bunnies in their arena, and what that signifies in terms of their environmental health. Books aimed towards children, with titles such as Here Comes the Big, Mean Dust Bunny, Night of the Living Dust Bunnies, Prickles vs. the Dust Bunnies, Dust Bunnies Do Love Donuts, Dust Bunnies and the Carpet Rat, What is Under Your Bed and many others, portray dust bunnies as beings that blur the line between a child’s imagination and actual physical reality. While for the most part, they are associated with other so-called degenerate creatures and pests such as mice and rats, they are also portrayed as creatures that provide children escape and company during their unattended hours. With the option to bond between either the monsters in their closets and dust bunnies, it is no wonder that due to their innocuous nature, children choose to befriend dust bunnies every time, despite the warnings from elders to not let them thrive. 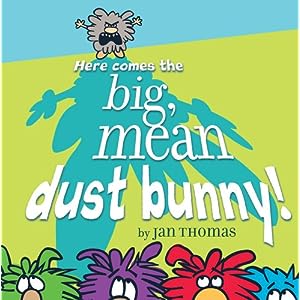 Prickles vs. The Dust Bunnies 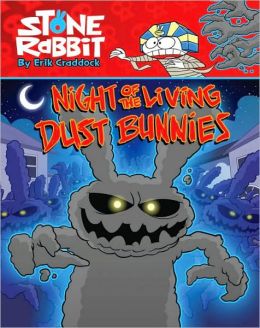 Night of the Living Dust Bunnies

The Dust Bunnies & the Carpet Rat

There is a particularly interesting portrayal of dust bunnies in the Canadian children’s TV show The Big Comfy Couch. Two dusty rabbits, who were termed dust bunnies in the show lived under the couch; and only the character of Molly believed in their existence and continued to protect them. This is another example of how dust bunnies challenge the line between materiality and animacy, as well as physical reality and imagination.

In the works of Hayao Miyazaki, which already challenge duality between the living and the non-living and the real and the imaginary, we find allusions to dust bunnies in the beloved movies My Neighbour Totoro and Spirited Away. In these movies, dust bunnies (originally named susuwatari, translated as ‘black soots’, ‘dust bunnies’ and ‘soot sprites’) are portrayed as supernatural creatures that inhabit unkempt human habitats. In My Neighbour Totoro, the new house of the protagonist is completely filled with these obviously living supernatural creatures. They are also considered protectors of the house and evaluate whether any resident is a good moral being. In Spirited Away, they are portrayed as workers in a boiler room where they are given various tasks to do and are looked after like livestock.

In housekeeping literature, we find diverse allusions to dust bunnies. The housekeeping literature I surveyed includes manuals for cleanliness dating back to the 1950s and earlier mainly directed to stay-at-home moms as well as more recent technology-imbued guides for all genders. While dust bunnies have been of particular concern historically to female housekeepers, their threat is felt by all, especially in our age of digital technology in which humans are concerned with the lifespan of their devices should dust bunnies take up residence in them. As such, dust bunnies have evolved culturally from being simply something that’s a woman’s concern, to a universal concern. They even present a threat to masculine enterprise, considering the current gender demographics in the world of technology/Silicon Valley. In all cases however, the strange life form of the dust bunnies are universally regarded as something that must be done away with in human habitats, yet it is rarely acknowledged that it is human habitats themselves that end up seeding this life.

The peculiar cultural and gendered association with dust bunnies is well-explored in the 2011 housekeeping manual Dust Bunnies Ate My Socks. Beyond all the scientific minutiae on dust bunnies, this text delves deepest into the ontology of dust bunnies. Apparently marketed towards the “housekeeping-challenged bachelor”[1], we are immediately warned that:

The ideas in this book are certainly not the approved woman’s version of housekeeping…guys have a different way of accomplishing such tasks than gals do. They also sometimes have a different set of tasks to accomplish in the first place. For example, a woman’s housekeeping challenges do not include finding ways to discretely store copies of Playboy-type magazines, or being sure to sweep up stray earring before the other girlfriend comes over…. This is definitely a guy book. Our suggestion is that if you actually decide to follow its suggestions, you hide the book from your girlfriend, so she doesn’t catch on to your methodology. Unless she enjoys a good laugh.[2]

Although tongue-in-cheek, Dust Bunnies Ate My Socks illustrate the gendered perception of household work that have not evolved all that much since the 19th century. Housekeeping is assumed to be a woman’s job, unless one happens to be a heterosexual male bachelor who fosters a taste in low-brow capitalist smut while carrying on multiple possibly illicit affairs with women which forms the foundation of his sense of masculinity. It is apparently in his hands that dust bunnies thrive in the household.

However, the book offers a counterintuitive solution to the problem of dust bunnies. We are told that “dust bunnies are a good thing. With so many uses for them, you want to accumulate all the dust bunnies you can…they multiply like rabbits…dust bunnies are indeed live, and that if you want them to be well and to multiply, you have to take good care of them”[3]. Upon this analysis, one must contend that despite the vaguely misogynist outlook, Dust Bunnies Ate My Socks presents a very progressive view towards animal welfare. Indeed, their sentience and intelligence is elevated to be comparable to human ontologies. “Dust bunnies are like the human body: they reject transplants from other people. And unlike human bodies, there has not yet been developed an anti-rejection vaccine for dust bunnies. Any attempt to introduce a stranger’s hair will tend to make an unhappy colony.”[4] Thus individual human biologies are intrinsically linked for the healthy growth and sustenance of dust bunnies. As such, dust bunnies act as indicator species for a household environment, recording genetic data from all its members.

Dust bunnies have also captured the imagination of scientists beyond pragmatic means to control them and what they can tell us about indoor air pollution. Astronomers and astrophysicists have borrowed from dust bunny ontologies to describe more celestial entities. A quick Google scholar search reveals this phenomenon as researchers speak of “nebular dust bunnies”, in the discussion of a meteorite in Tagish Lake[5]. While small, neglected and universally abhorred, the complex ontology of dust bunnies is worth exploring when it comes literally to exploring the more-than-human. In a way, the emergent relationship between dust bunny ontologies and science subverts pre-existing assumptions about human relationships with detritus.

On the whole, dust bunnies, a certainly overlooked aspect of human naturecultures, symbolize disarray, disuse and unkemptness in human habitats. Their appearance, for the large part, in children’s and housekeeping literature attests to this notion, although on occasion they are known to provide escapist fantasies. Yet, upon further examination of their being, we may find that not only can their ontologies provide answers to celestial mysteries, but also to those of our own. They are literally an archive of human’s past life remains – they are composed of dead cells of living inhabitants of a household and they act as virtual decomposers of past human life remains and memories. They function both as living pests and inanimate but growing non-living objects while concealing many histories of human and other life in its assemblages and challenging human imagination. Thus, dust bunnies are living and growing ecosystems that also function as human reliquaries. Thinking of dust bunnies in these complex terms can invoke creative responses to our complex relationships with the environment and our own selves.

Dutch indie rock band, Bettie Serveert (translated as ‘Bettie serves”) has an album entitled Dust Bunnies and a song in said album entitled “Dust Bunny”. They are a lyrical evocation of our memories and association with dust bunnies.

Pass the cracks on every weird occasion

You keep your fingers crossed at any time

You put your foot down

You find the number, try to break the code

You put your foot down

And underneath the bed the world seems gray

The pain inside your head has gone away.[6]

Indeed, as dust bunnies are the physical embodiment of our ties to ourselves and each other, both past and present, I have been inspired to reflect on this through a short poetic form, that reflects on the so-called starvation of a colony of dust bunnies as human attachments fade and people are no longer in the same symbiogentic relationship with each other and their local community of dust bunnies.

these soft layers of ourselves

that we trample and breathe

but an act of

with ourselves. Me and you.

As we die they grow

(but keep hidden our essences).

our monsoons of anguish and dissonance)

jarring souvenirs our past (and current mistakes)

It’s been a month

since you’ve left, since you left

me for someone only the house bunnies met.

The bunnies under my feet

remember you (and her well).

They live off of your relics (and hers),

your flesh your blood decayed.

Perhaps the day will come when dust bunnies will truly and finally be extinct from human households, but we can be sure that day will be one when humans, too, have overstayed their welcome.