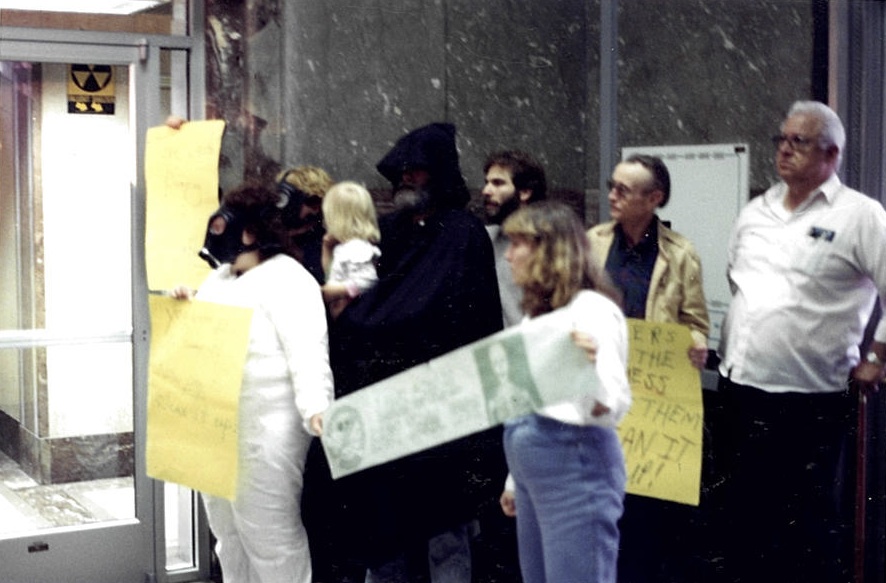 In the late 1980s, nobody asked the mostly working-class residents of rural eastern Tennessee if they wanted Chicago’s trash. No one inquired how residents felt about the proposition of a mega-landfill in their communities. They were not consulted about whether they wanted their air fouled, their soil and water polluted, or their property values further suppressed. For politicians and calculating waste-management corporations, the solution seemed obvious: eastern Tennessee needed jobs and the nation’s major cities needed a place to put their garbage. The logic was simple. It was a “win-win” situation.

Local residents saw things differently. In 1990, two residents of Roane County, members of a local grassroots organization called Save Our Cumberland Mountains, traced a trail of garbage a mile long up the Tennessee River where they found the side of a landfill collapsing into the water. The state had cited the landfill with 125 violations since 1982 yet it continued doing business as usual. This revelation sparked a decade-long campaign by residents to force existing landfills into compliance with “the people’s” laws and to stop the construction of new mega-landfills to handle out-of-state waste in Tennessee. By asserting their right to participate in the decisions that affected their communities and environment, residents of eastern Tennessee prevented further degradation of their environment, carved out an increased space for public participation in environmental decision making, and forced decision makers to more fully consider the costs of consumption and the need to reduce wastes. Their story illuminates the importance of public participation, social justice, public education, and capacity building in working toward sustainability.

The ability of citizens to have a say about what happens in their communities and to their local environment is a bedrock sustainability principle but not for the obvious reasons.

When the mostly working-class members of Save Our Cumberland Mountains (SOCM or “Sock ‘em”), and thousands of other citizen activists living in mostly rural places around the United States, stood up to the dumping of “out of state waste” near their communities in the 1980s and 1990s, critics called them “NIMBYs.” Detractors accused activists of opposing needed economic development and the vital management of the nation’s growing waste stream through the short-sighted and locally-interested rationale of “not in my back yard.” Activists saw things differently.

They understood their struggle against multinational waste management corporations like Browning Ferris Incorporated and Waste Management Incorporated as part of larger structures of social, economic and environmental inequality. They felt preyed upon because they were poor and perceived by company executives and politicians as uneducated and “backward.” Proposals to dump garbage and toxic waste from Chicago, St. Louis, Cleveland, and other major cities in the economically-depressed counties of Appalachia was just a continuation of the abuse local people had experienced at the hand of coal companies for the better part of a century. And, they recognized their fight in those of other rural and impoverished peoples resisting the imposition of the externalized costs of affluence and consumption on their homes, families and communities. Activists redefined their opposition as “NIABYism”—“not in anybody’s back yard.” They pushed to expand the ability of local residents to have a say in the decisions that affected their local environments, communities, and public health but also advocated for reducing waste and consumption in general and empowering people everywhere to protect themselves from pollution.

In the 1990s, Save Our Cumberland Mountains never fully achieved their goals. They supported the passage of a “bad boy” law that prevented waste management companies like the operator of the landfill that was spilling trash into the Tennessee River with a history of environmental violations from obtaining permits. But, they were unable to convince the Tennessee State Assembly to pass a comprehensive law that would have spelled out design specifications to prevent pollution or expand citizen oversight on the state waste management board. They worked with allies facing “out-of-state waste” in other states but were ultimately unable to pass federal legislation that would have regulated the exportation of waste across state lines. County by county, however, they achieved local oversight over landfill permitting decisions and eventually, through constant pressure, gained a seat at the permit decision-making table within the state Department of Environment and Conservation. At the end of their nearly decade-long campaign in the late 1990s, few of the proposed landfills were permitted. None were built in the counties with an active Save Our Cumberland Mountains presence.

The ability of corporations, governments, and the global affluent to externalize the costs of affluence and consumption undermines attempts at achieving sustainability. In a way, it represents a “leak” in what might be visualized as a closed loop. Distributing these costs across a large population or shifting them onto a distant population to be breathed, drank, and absorbed into the tissue of human bodies masks the true costs of doing business. Profits do not reflect damage to the environment and human health and the ability to reap larger profits by externalizing environmental and social costs de-incentivizes attempts at reform.

In the modern era, the disenfranchised and impoverished have disproportionately born the brunt of these externalities. Inequality—resulting from institutionalized discrimination and racism or from informal social and economic structures—equates inequity in the ability of people to protect themselves. Thus, it provides a “sink” for these externalized costs. Waste and pollution flows toward the powerless and, in a perverse feedback loop, perpetuates their powerlessness. Save Our Cumberland Mountains recognized this reality and attempted to disrupt it. As they did, they recognized their struggle as similar to other rural and economically disadvantaged people living in Tennessee. They reached out to African American activists fighting landfills and toxic waste in western Tennessee. Their work on toxics issues coincided with an “anti-racism” campaign—an attempt to raise the consciousness of their mostly white, working class membership about how racism breeds inequality and undermined their attempts, and those of their allies, to protect their communities. Through this work, SOCM came to understand and describe itself as a “social, economic, and environmental justice” organization.

It may be argued that ultimately, their success in blocking “mega landfills” in Tennessee simply perpetuated the process of externalizing costs—empowered, residents of eastern Tennessee simply shifted that garbage on poor people elsewhere. But it reveals the relationship between citizen participation and empowerment and “plugging the leaks” encouraged by environmental, social, and economic inequalities. As activists in Tennessee recognized, if all people had a say in whether or not they would be dumped on, then American cities would be forced to rethink how they deal with waste—they would be forced to more-fully account for waste and pollution in their ledgers and seek new, more sustainable, solutions. Unfortunately, Save Our Cumberland Mountains’ reach was limited but their intent was clear: “Not in Anybody’s Back Yard.” Empower citizens and squash social, economic, and political inequalities to create a more sustainable future.

Cody Ferguson, “Not In My Back Yard? Not In Anybody’s Back Yard!,” Tales of Hope and Caution in Environmental Justice, accessed January 16th, 2021, 06:22:38, http://hfe-observatories.org/stories/not-in-my-back-yard-not-in-anybodys-back-yard/.