Communities with a history of cultural misunderstanding and political conflict can come together to steward a shared watershed. One such example of multijurisdictional collaboration is demonstrated in the Big Manistee River Watershed by the Little River Band of Ottawa Indians (LRBOI) designing and implementing a restoration program for the imperiled fish, the Lake Sturgeon, or Nmé, in the Tribe’s language (Anishinaabemowin). The program has brought together residents of the watershed around distinctive—but compatible—conceptions of sustainability. Key to the success of the program is its emphasis on the relationships connecting culture, politics and sustainability. Restoration is not only about numbers of fish; it is also about the involvement of community members at all levels of the restoration process itself. Through participation and ceremony, individuals develop their own genuine relationships to nonhuman species, expand or adapt their worldviews to others, and learn to act collectively on behalf of the sustainability of the watershed.

The Big Manistee River watershed is part of the Ceded territory of the Little River Band of Ottawa Indians, an Anishinaabe nation in the Great Lakes region. This territory is currently referred to as Northwestern Michigan in the United States. Since time immemorial, Anishinaabek in the watershed depended on the continuance of relationships connecting humans, plants, animals and the land. Jimmie Mitchell, Director of Natural Resources for the Tribe, calls it baamaadziwin, which in his language, Anishinaabemowin, means “living in a good and respectful way” (Mitchell 2013, 21). Baamaadziwin motivates people to be more than “good and just,” but “to being servants, devoting ourselves to making a difference in all that has occurred and may still be occurring within our respective communities and environment… [which] includes restoring the balance of our shared natural environment and of all inhabitants who are dependent upon a robust ecosystem” (22).

As a concept of sustainability among the Anishinaabek, baamaadziwin pertains to the relationship between Anishinaabek and Nmé (Lake Sturgeon). Nmé is the largest and oldest living fish in the Great Lakes basin, reaching over six feet in length, over 150 pounds with the potential to exceed 100 years in age. Pre-colonialization Nmé were abundant, but their current status is at less than one percent of their historic numbers (N. Auer 1999; N. A. Auer and Dempsey 2013; Tody 1973). Nmé served the Anishinaabek as a substantial source of food, an indicator species for monitoring the environment, and a clan identity. Mitchell says, “There were different places on the river that were set for sturgeon clans… There were specific areas for sucker sturgeon runs.” Jay Sam, Historic Preservation Officer, refers to sturgeon as “The grandfather fish,” and that it would “sacrifice” itself “so the people would have food until the other crops were available.” As a clan spirit, Anishinaabe leaders would sign documents with images of sturgeon (Holtgren 2013, 135). Just as Anishinaabe families today are descendants of generations of Anishinaabek from this region, so too are surviving Nmé today the descendants of those who interacted with the very same families generations ago. 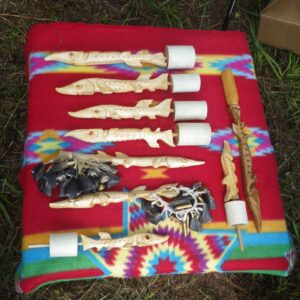 Photo courtesy of the LRBOI Staff

The relationship among Anishinaabek and Nmé was part of a symbiotic cultural, political and ecological system. However, settler colonialism in the Great Lakes region threatened the stability of Nmé populations and the Anishinaabe system through over-harvesting, dams, stocking rivers with non-native fish species for sport fishing, and environmental change. During the late 19th century the Nmé was considered a nuisance that held no value to settlers, resulting in the steep decline in Nmé populations. By the early 2000s, less than 40-50 fish per year came to spawn in the Manistee River and many historic Nmé rivers lost their populations completely. In many ways, especially to settler Americans, it was a forgotten fish. Kenny Pheasant, a First Nation elder, says “Decline of the sturgeon has corresponded with decline in sturgeon clan families. Only a few sturgeon clan families are known around here” (Holtgren 2011).

After the U.S. reaffirmed its “recognition” of the LRBOI as a sovereign nation, the Tribe used its “recognized” government authority to formalize natural resources stewardship and environmental protection programs. Restoring relatives such as Nmé is an important part of that. Yet restoring Nmé with the Indigenous conception of stewardship was not easy. Some people in the Manistee area believed that Anishinaabek did not desire to live sustainably, and they believed that treaty rights were unfair to settler Americans. The state fought Tribal efforts for Nmé restoration, claiming the LRBOI did not have the legal authority to engage in restoration. Many local residents thought it was a waste of time and money to restore a fish that might take 100 years to recover fully. In short, settler Americans did not understand Anishinaabe culture.

For LRBOI, the importance of Nmé restoration rested on a different conception of sustainability. Following Anishinaabe culture, the Tribe needed to maintain the same genetic make-up of the sturgeon population while increasing their abundance, because those are the Nmé which Anishinaabek have related to since time immemorial. The fish are ancestors; restoration is about bringing them back to the river and restoring the relationships with Nmé. The fact that populations would not reach harvestable levels for 100 years was considered a positive, because the value of the fish is the relationship between Nmé and Anishinaabe as a source of spiritual wellness. Sustainability was understood as a spiritual relationship. As one elder put it, “Yes, subsistence [is important], but then you have the traditional piece that comes in. When you do that you also tie in spiritual, because spiritual will tie in with the traditional aspects of it, so that is really hard to separate those many times because it is part of what I call the circle of life, how it all ties together in some way” (Holtgren 2011). 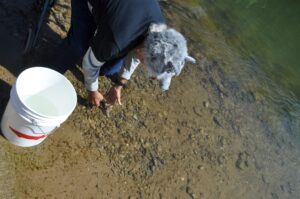 Despite the resistance and differences in interpretation of sustainability, the Tribe nonetheless persisted in its Nmé restoration through the Natural Resources Department, as a sacred responsibility. The Department started a cultural context group, composed of a diverse range of tribal members and biologists, which would develop goals and objectives for restoration. The cultural context group facilitated “a voice” that “was an amalgamation of cultural, biological, political, and social elements, all being important and often indistinguishable” (135). The goal was to “restore the harmony and connectivity between Nmé and the Anishinaabek and bring them both back to the river… Bringing the sturgeon back to the river was an obvious biological element; however, restoring harmony between sturgeon and people was steeped in the cultural and social realm. Each meeting began with a ceremony, and the conversation was held over a feast” (Holtgren 2013, 136). Ultimately, the Department established the first streamside rearing facility for protecting young sturgeon before they are released each Fall in order to preserve their genetic parentage (Holtgren et al. 2007).

The program is based on relationships with government, non-profit, and settler Americans in the watershed. Federal partnerships have provided financial assistance and helped form a streamside rearing task group.  Every September, the public release of young Nmé includes a pipe ceremony and feast. Each attendee guides a young sturgeon by hand back to the river. Today, the event can attract up to 600 attendees. The relationships between people and sturgeon change and become stronger as individuals realize their responsibilities to Nmé. This is evidenced at the annual public Nmé release ceremony as participants, including many children, begin to feel a sense of responsibility for Nmé; a lasting connection when holding the fish and gently placing it in the water. Importantly, people interact within Anishinaabe culture, and what emerges is their own sense of relationship with Nmé. Many explained how they had come to realize it is people who also depend on Nmé.

This tribally initiated stewardship program has changed the very manner in which the Great Lakes fishery is now managed. States such as Michigan and Wisconsin have even adopted the management practice of streamside rearing and hold public fish releases. Politically, the fish have the power to heal and create new and sustainable relationships among people. This is especially significant in a watershed where the relationships among people have been strained by settler colonialism. The participants do not necessarily adopt the Anishinaabe way of thinking, yet they embrace a sense of themselves as occupants sharing the watershed. Though it is too early to tell for sure, current evidence suggests the program has been successful in Nmé restoration. Success is found in how the Nmé has changed the relationship between the settler Americans in the Manistee area and the Anishinaabek as they both come to the river together. Fishing guides, who previously were suspicious of Tribal restoration initiatives, began voluntarily helping them count and locate sturgeon and informing their clients about the importance of Nmé and Tribal stewardship. Settler Americans are now happy to see the LRBOI biologists on the river. LRBOI is no longer seen as a “casino Tribe” but as a nation doing distinctive work in the region based on Anishinaabe culture and science. People search out tribes for partnership, and the watershed community now views Nmé as a species whose presence makes the Manistee area special—with a “Native” species that people now can see.

Nmé restoration in the Big Manistee Watershed expresses many aspects of Baamaadziwin; it is a tale of hope showing the importance of a symbiotic cultural, political and ecological system and how Anishinaabe relations to Nmé play a key role in sustainability. The idea that the specific Nmé ancestry needed to be kept, which corresponded to specific relationships between particular families and fish, accords with conservation biology where maintaining unique genetic attributes of each river population is desired. Politically, sustainability can also be enhanced through a community-based, participatory approach. Restoration is not simply numbers of fish, but getting community members to actively participate at all levels of the restoration process itself. Through participation, people develop their own genuine relationships to nonhumans, expand or adapt their worldviews to others and become able to act together as members of a shared watershed.

We thank the Tribal Ogema, Tribal Council and the Native Species Cultural Context Group for their consistent care and support for the Nmé. We thank Jimmie Mitchell, Kristie Dotson, Sophia Pavlos, Sally Kitsch, Paul Hirt and Joan McGregor for their important comments on the writing of this story.